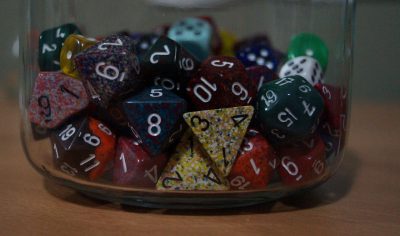 The newest edition of Dungeons & Dragons may not have that new game scent anymore, but over a year of regular play has done a lot to display its virtues and vices to me. Before we get to the five things I like most and least about the game, I’ll provide a bit of background.

I was all set to ignore 5e (still being called D&D Next at the time), and paid no attention to the public playtest. My fantasy RPG itch was being scratched by Pathfinder, after all, and really, could any game dethrone Second Edition AD&D as my favourite fantasy RPG of all time? But 5e was released, and it got a lot of positive attention… and my mother, the person that got me the Mentzer Basic Set for my eighth birthday and set off a lifetime love of RPGs, gifted me with the Player’s Handbook, Dungeon Master’s Guide, and Monster Manual… so I gave it a shot. And I’m glad I did.

That out of the way, let’s get to five things I really like about 5e:

Lots to like, right? All is not sunshine and unicorns however, as the next five points will detail. Without further ado, five things I dislike about 5th edition…

So there they are: five and five. Have you been playing D&D 5e? Why or why not? What are your likes and dislikes?

The End of the World: Zombie Apocalypse by Fantasy Flight Games – $19.95 .pdf

Thanks to comic book/tv juggernaut The Walking Dead, zombies have been hot for the last few years. Someone more academically inclined than myself could doubtless express why these perennial favourites have captured the zeitgeist, but, in my opinion, I simply think people enjoy stories about people whose lives are relentlessly crappier than their own. That said, I recently had a chance to read The End of the World: Zombie Apocalypse by Fantasy Flight Games; in technical terms, this is a 144 page full-colour hardcover book or .pdf.