Warning: this post is a bit off topic for an RPG publisher’s website, maybe.  Humour me here.

If you haven’t heard about Dinovember yet, you are missing out.

This is a highlight for the dire rugrats in our lives, though by the end of the month it is often a burden on us as we scramble for yet another thing for the dinosaurs to do and Ken curses me for introducing it in the first place. 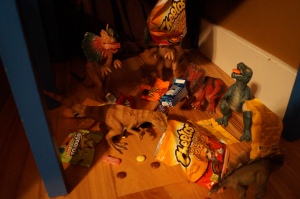 DAY 1: The dinosaurs got into the Halloween candy. It seems to be the way they start every Dinovember, and who can blame them?

So here’s the deal: Dinovember started in 2012. The idea was that by capturing the moments when the plastic dinosaurs came to life and caused chaos in their house, Refe and Susan Tuma were “igniting the imaginations of hundreds of thousands of children–young and old–across the world.”

It took off like wildfire and since 2012 people have been sharing their own pictures of what their dinosaurs did last night.

DAY 2: With a new double toaster in the house, the dinosaurs seemed keen on making a midnight snack. Two points for team work?

It is a great way to get kids away from the screens, and back to using their imagination. We’ve often found our kids setting the dinosaurs up again, when they think we aren’t looking, and then announcing the dinosaurs did something else and showing us incredible and creative things. They are forever guessing what could be coming next, and they’ve learned to be really good sports when the dinosaurs have done terrible things (like eat some of their Halloween candy).

Another perk? I gained a better understanding of my toddler during Dinovember. How so? Well, I learned it is sickly satisfying to watch your kids scrub crayon off the fridge, after you had a great time putting it there. (Sorry kids – they’re your dinosaurs, you clean it up.) 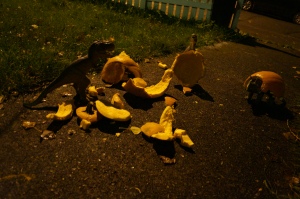 DAY 3: The dinosaurs said goodbye to Halloween by smashing the pumpkins. “I am not impressed, dinosaurs,” said Rugrat#2.

It’s a game we all get to play for the whole month. It forces Ken and me to be creative, and it helps the kids use their imaginations and believe in something amazing.

“There is only one thing that can make the dinosaurs come to life: MAGIC!” – Rugrat#1

I hope you’ve enjoyed the photos from this month so far; no doubt those dinosaurs will be up to more shenanigans before the month is through.

Have you ever done Dinovember? Share in the comments your favourite thing you’ve seen them do!