A while ago I wrote a review for The End of the World: Zombie Apocalypse by Fantasy Flight Games. I liked what I read, and was eager to get a couple sessions of the game in, which happened around Hallowe’en. The following is an account of the first session. 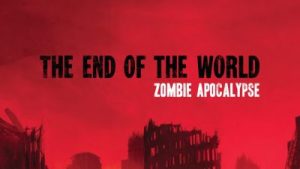 Once the players had settled, we had a brief discussion of their characters, particularly their traits and what they meant. I chose to skip the voting portion of character creation and just go with each player’s depiction of themselves. Then I set the stage for them.

It was game night, all of the spouses and children were conveniently elsewhere, everyone was settled in with their beverage of choice. People in town had been getting sick and the news was reporting increasingly common incidences of violence. There frequently were the faint sounds of sirens in the distance. Then everyone heard a crash in the air, then the sound of an aircraft falling toward the ground, followed by a bone rattling crash and a small explosion.

They rushed out to find that two of the commuter seaplanes whose flightpaths pass over my house had crashed, one falling into my neighbour’s home, destroying it, the other hitting the road in front of my house, destroying most of the parked cars (including most of theirs), and then rolling in a fiery mass into the house across from mine.

Everyone jumped into action, splitting into two groups: one heading to the neighbour, the other going across the street where they could hear screaming and a baby crying.

I went across the street, but stopped at the wreckage; I saw something moving in it… a person! I jumped into action, called my friends and offered help to the injured man. 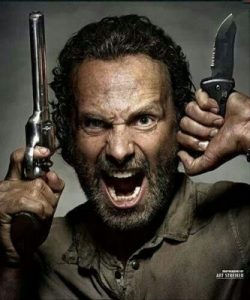 We saw little of this….

The infected tore my throat out with the requisite arterial spray and looks of disbelief and dawning horror from the other players.  Things got real after that. Taking down this single infected took the combined efforts of the entire group, as it likely would in real life if five regular guys pushing forty had to take care of things. One of the characters got bitten… and infected in the fracas. Not that he knew it yet. 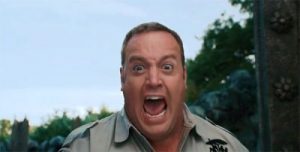 …but plenty of this.

After taking the infected down, they got the woman and her baby from across the street and retreated to my house to ransack it for all it was worth. The sounds of disaster carried on all night; fire could be seen toward the city. A plan was made to get to one of the character’s parents’ boat and take it to one of the outlying islands where another character’s parents’ had a cabin.

Then morning came and I kicked out the other crutch: the people killed by the infected were rising as zombies.

I had risen as a zombie.

There was a brief discussion, and it was decided that they would do their best to avoid me, rather than crush my skull. It was heartwarming.

The group rushed out to the one vehicle that had been parked far enough from my house to avoid being destroyed…  thankfully it was <NAME WITHHELD>’s minivan. Everyone piled in and drove up onto the railroad tracks next to my house. They wondered at the lack of people out and about, the absence of people fleeing from the city, but decided to stick to the plan and headed away from downtown.

They made it a few kilometres, until coming to a pair of unmoving cars blocking a rail trestle that crosses the highway. The highway below was packed with unmoving vehicles with some visible infected rampaging among them and a few zombies waving in the breeze.  Unnoticed by the infected, the group checked the cars out; one was empty, the other had a vacant-eyed zombie in the driver’s seat and a rabid looking infected in the passenger’s seat.

Seeing the PCs, the infected went berserk, and the guys knew they had to take it out before the infected on the highway heard it and came swarming up the steep slope to the trestle. Two of them moved the empty car with some difficulty… it was out of gas… and the others moved into position to deal with the other car.

The zombie was dispatched without too much difficulty, but the infected managed to sound the car’s horn, which made the baby cry. With the full attention of the infected below now on them (and quickly making their way toward the slope), the van driver decided it was time to take matters into his own hands and sped toward the car on the trestle. Seeing this, the two PCs dealing with the empty car sent it careening down the slope, taking out a couple infected in its descent.

The van hit the car, and slowly pushed it down the tracks, until it finally knocked it clear when the tracks turned. The PCs all climbed back aboard in the process and gritted their teeth as the infected reached the moving vehicle and began to batter it with their bodies. The van sped up after knocking the obstacle clear, leaving the infected behind.

I had each player then narrate a descriptive scene describing something they saw from the van, or something they were feeling based on their experiences thus far. Then they arrived at their destination with the boat in the driveway… and the driver was nearly shot by his stepfather. The misunderstanding was resolved, and everyone assembled readied themselves for a boat journey as we ended for the night.

I had a lot of fun running The End of the World: Zombie Apocalypse, and the players enjoyed playing as themselves. So… what will happen next? Will we uncover the cause of this sudden and drastic change in reality? Will the PCs make it off the island? What will the world’s response be? How widespread is the event? What happens if <NAME WITHHELD> succumbs to his infection on the boat? Will the secrets of Quarantine Zone 4 ever be uncovered? Hopefully we get another session in soon so we can find out!