How’d That Happen? (5 Ways to Use Plot Twist Cards) 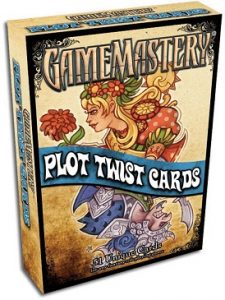 Well over a year ago I posted a review of GameMastery Plot Twist Cards: Flashbacks on Paizo.  This product is described as a “vividly illustrated deck” that “opens up a new experience of shared storytelling, providing players with ways to suggest events during any adventure.”  The idea is players get one of these at campaign start and at every level, and they can give the card to the GM to suggest a possible way for the events to play out.

At the time I wrote the review we’d recently introduced those cards, as well as the first set, as a means of putting a little power in the hands of the players as a reward for keeping a campaign journal. Before each session the player could read their journal and, assuming it was half decent, gain a card to redeem at a later date.

Since then we’ve played around with them a bit more, and, well, it’s been a bit of time since we added them to our gaming tool kit, so it seemed fitting to talk about them again, specifically, some cool ways you can add them to your campaign. 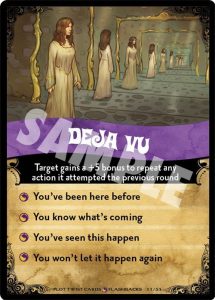 Each of the cards features the card name that represents a theme, a spot with a mechanic associated with the theme, and then four potential story points.  (I should note the flashback set often had me pondering exactly how the association between the story point and the card name was made, and if you are only going to pick yourself up one of these decks, I strongly suggest it be the original one.)

While I haven’t seen it done, I’ve also heard of the cards being used for board games like HeroQuest and Castle Ravenloft, or being shuffled up with a Harrow Deck.

Have you ever tried out the Plot Twist cards? What’s your most memorable use of a card?