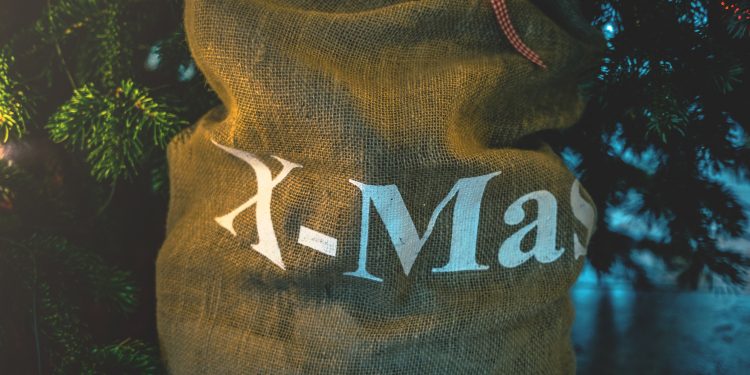 This piece of microfiction is a follow up to Secret Santa.

Trefor’s face blanched. It was just as he feared: another shiny red present with a fluffy green bow. This was the third one. He looked up and down the hall, but there was no one there.

Trefor picked it up, and held it as far away from his body as he could, and carried it down the stairs and around the back of the building to the dumpster. He looked around again, lifted the lid of the dumpster and tossed the perfectly wrapped present into the bin.

He made it to work on time. He’d hated the job when he started there eighteen months ago. His boss at the time was a penny pincher, a real scrooge. But he’d showed her. He’d showed them all.

It was Christmas Eve, and it seemed everyone was out of groceries. The shift should have passed quickly, but Trefor was on edge. Everyone looked sinister.

After several hours, he clocked out and got on his bike. He breathed a sigh of relief as his apartment complex came into view. Only a few hours left. He’d almost done it.

He secured his bike in the rack outside and made his way to the elevator. The hall was empty. Trefor pressed the button and waited. He heard something down the hall and turned to look. The elevator pinged and the doors opened. His eyes focused on the strange shadow that rounded the corner, and Trefor stepped backward into the elevator. The doors closed.

Trefor realized he wasn’t alone. A tall figure peeled himself from the shadows in the corner of the elevator.

“Hello my little elf. You haven’t been accepting my gifts.”

The voice sent a chill down Trefor’s spine. He punched the elevator buttons, desperate for it to open.

The figure produced a box and held it out to Trefor.

When the elevator doors opened on the third floor the only thing inside was an empty red box and a green ribbon.