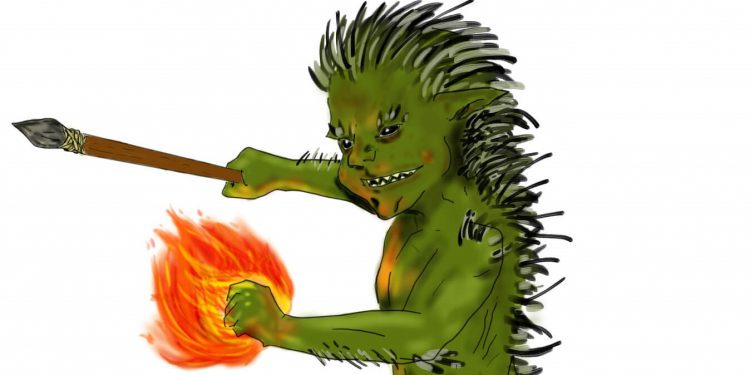 Once upon a time, these creatures went by many other names.

They were antagonists of myth and fable. The subject of cautionary tales parents would tell their children to encourage common sense and good behaviour. They were the face of humanity’s collective fear of the unknown. They were feared and respected.

Goblins’ folkloric qualities have been stripped away from them in the world’s oldest roleplaying game. The aspects that have made them mythic across the vast and varied tapestry of human culture have been stripped away and granted to other creatures, leaving the poor goblin a pathetic, sniveling servitor to creatures that carry the names that were once synonymous with goblin. First level adventurers kill these pathetic excuses for goblinkind by the score before moving on to bigger challenges. No one fears goblins anymore. No one respects them. 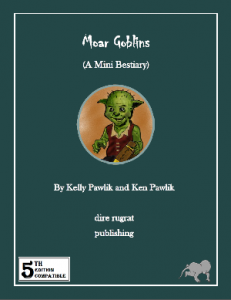 Dire Rugrat Publishing aims to change that with Moar Goblins, which features a sextet of goblinoids adapted from a variety of real-world cultures.

With challenges ranging from ½ to 6, Moar Goblins will keep adventurers busy into the middle of their career, and hopefully rebuild some of the respect goblins have lost over the course of five editions.

Moar Goblins (A Mini Bestiary) was released on DriveThruRPG last week.  We love our blog readers, so we’re sharing a sample of one of the goblin variants below.

Pukwudgies reside in moderate climates, typically near wooded areas with fresh sources of water. If left to themselves, or occasionally gifted with offerings, pukwudgies refrain from interfering in the lives of those in the area. 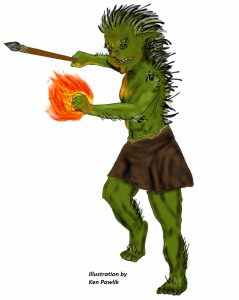 Goblinoids. Pukwudgies were once friendly, helpful goblinoids, but their inability to share a language with and understand the ideals of those they attempted to befriend and aid resulted in many of their efforts backfiring. Over time, the creatures were viewed as a nuisance and, feeling unappreciated, the pukwudgies decided to torment those who tried to exclude them and treated them like inferior beings.

Growing Resentment. The less appreciated a pukwudgie feels, the more malicious it becomes. Harmful pranks, missing items and eventually disappearing children are not uncommon in areas with tribes of pukwudgies that believe they are mistreated by humanoids.

Skilled Hunters. Pukwudgies are capable hunters. Living off the land, they are adept at navigating the wilderness. They are also proficient with poison and often dress their arrows with it to take down those who dare trespass into their territory.

Magical Aptitude. Drawing on their bond with nature, pukwudgies have some facility with magic, including the ability to take on the form on a porcupine.

Pick up your copy of Moar Goblins today and, (bonus!) if you use this link you can pick it up for just $1.50!