Definition: (of an animal or force of nature) fierce, violent, and uncontrolled.

The fifth edition of the world’s oldest role-playing game relies heavily on combat, but often what should be cinematic and memorable is laden down with dice rolls and rules that prevent truly memorable acts from occurring.

Knocking out a PC with one hit, for example, is nearly impossible. Until now. 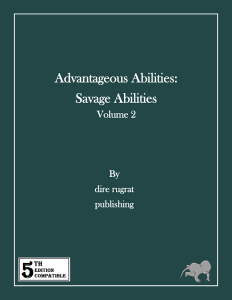 Give your PCs the unexpected as they come up against a monster with a slightly different strategy than others of its kind.

Pick up the whole Advantageous Abilities line now on DriveThruRPG.