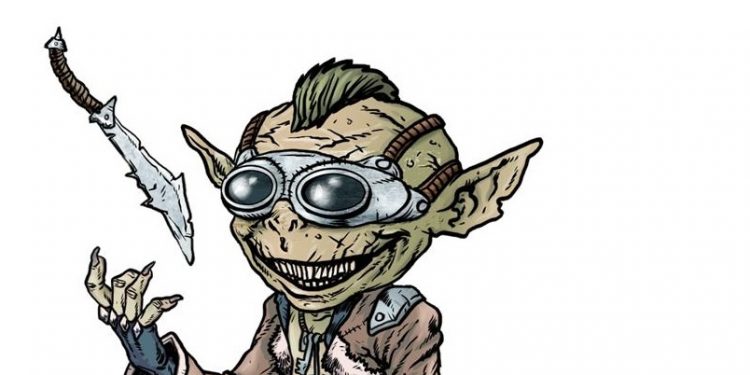 Looking to add an NPC to your Starfinder session? Look no further!

“What, that? That’s just a fracking flesh wound, chum, it’ll be gone in a tick.” 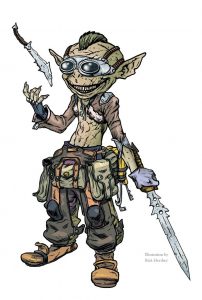 When his tribe’s camp was destroyed, Tarrgk and a small band of warriors were returning from an unsuccessful raid, laden down with their dead companions. Upon seeing the burning craft strike their home like the finger of a vengeful god, Tarrgk’s companions fell to their knees and begged forgiveness for their failures. Tarrgk, however, did not. He had seen something break off the crashing structure and arc to the east, and after the crash, he could see a faintly blinking white light some distance in that direction. Sensing opportunity, he snuck away from his companions to investigate.

About a mile away, Tarrgk found his prize: a segmented metal cylinder the size of five goblin tents. As he approached the cylinder, a door sized portion of it folded out into stairs with a hiss, creating a softly glowing entryway. The goblin cautiously hefted his spear and entered the cylinder with a mixture of trepidation and excitement, sure that he had discovered something truly valuable.

As Tarrgk passed through the door, a terrifying, man-sized creature with a smooth, glassy black face lunged at him, stabbing him with some kind of fine spear attached to a liquid filled shaft. Tarrgk thrust his weapon at the thing reflexively, stabbing it deep in the thigh and killing the already mortally wounded monster. As the rush of adrenaline subsided, Tarrgk’s head began to swim, and he passed out.

When he awoke mere moments later, Tarrgk was changed. He understood the cosmonaut he had killed had not intended to attack him; she had injected him with a nanite solution that connected Tarrgk’s brain directly to the escape capsule’s central computer, effectively making him smarter and more canny than he had been. The connection also informed Tarrgk that the nanites would work to keep their host safe, knitting almost any injury suffered and making his body and mind hardier.

Tarrgk used his enhanced knowledge to assemble a resonant blade, an extraordinarily sharp knife that doesn’t suffer the effects of friction, and that returns to his hand at his mental command, and a pair of tinted goggles. He also found the craft’s stealth module and rendered the ship invisible to all but the most advanced sensors, though he can always locate it due to the nanite’s connection to its central computer.

Finding his fellows far more limited than himself upon his return, Tarrgk quickly abandoned them, and his name. With the new name, Shades the Blade, he set out into the world ready to sell his services to whomever was willing to part with sufficient funds. Shades takes on nearly any task, regardless of the danger, as the nanites heal even the most grievous wounds rapidly, though he is quick to retreat in the rare instance that his injuries are slow to disappear.