So Many Pets, So Little Time 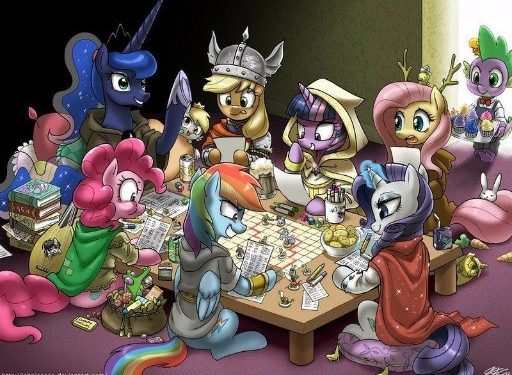 Who’s Who in Equestria

Excitement was high in the Dire Rugrat household, Daddy Rugrat had read the Tales of Equestria rulebook, and all three rugrats, as well as Mummy Rugrat, were excited to make their PCs (pony characters) and start adventuring in Equestria. I went to the River Horse website, downloaded the PC sheets, one for each type of pony, and everyone set to work.
Rugrat 3 created Cup Cake, a riotously coloured unicorn with purple head and flanks, green legs, black eyes and horn, crimson tail, and I think a green mane. Cup Cake’s cutie mark is a diamond on a purple and green cake… maybe. It’s hard to be certain. Her chosen talent is the ability to create force fields, and her very appropriate quirk is a short attention span; her Element of Harmony is Magic, which has yet to have much effect on her…
Rugrat 2 created Thunder Gust, a pegasus with green body and blue mane and tail. His cutie mark is three clouds with lightning shooting out of them, and his Element of Harmony is Honesty.
Against my better judgment, Rugrat 1 was allowed to create a changeling (rules for changeling characters are in The Bestiary of Equestria [review forthcoming], which Rugrat 1 was expressly asked to not read…. but he did anyway, because children know it is better to beg forgiveness than ask permission…) named Shiftwing. Shiftwing chose laughter as his Element of Harmony, a fear of bees (just like his player) as his Quirk, and chose to upgrade his innate Morph Talent rather than selecting a second one. Rugrat 1 will be a rules lawyering powergamer in the future, I fear… but we will love him anyway.
Finally, Mummy Rugrat created Calm Heart, a light brown earth pony with darker brown mane and tail. Her Element of Harmony is Kindness, her cutie mark is a heart with two crossed band-aids set on it, and she selected Healing Touch as her Talent, and Messy as her Quirk.

A Day at the Market

The game started with the PCs at the weekend market. Calm Heart was looking for more bandages, Thunder Gust wanted some eggs, Shiftwing was searching for a solar powered lamp, and Cup Cake wanted toys. So many toys. While they were shopping, they came across a cute, but very rude bunny. The ponies interacted with the aggressive rodent in humorous fashion, until his pony, the famous pegasus Fluttershy, found them together. Realizing their obvious animal wrangling skills, and needing someone to take care of the Mane Six’s pets while they went off adventuring, she recruited them like a a shy, pony Gandalf asking Bilbo Baggins to give up his comfortable hobbit life. The PCs agreed of course, as there’d be no game otherwise, and they visited Fluttershy at her home outside the Everfree Forest.

At Fluttershy’s house, the PCs met the rest of the Mane Six, the most famous ponies in all of Equestria! And after a brief introduction to the Mane Pets, the Six were on their way.
It didn’t take long for everything to go wrong. The unruly pets, spurred by the very poorly named Angel Bunny, misbehaved. The PCs attempted to treat them to their favourite things, Cup Cake obsessively looked for the chocolate mice that she knew were the favourite of Twilight Sparkle’s owl, Owlowiscious, but Calm Heart stepped on Angel’s tail and set the foul tempered rodent off! He bounced through the house, riling up the already agitated pets. They smashed things, knocked over furniture, and finally escaped out the front door left open by Cup Cake in her fruitless search for chocolate mice.

Sorting themselves out, the PCs realized the pets had escaped… in different directions into the ominous Everfree Forest. Deciding that the mess in Fluttershy’s house could wait, the PCs set off into the forest to effect a rescue. They started by following baby alligator tracks down the river which eventually led them to a small island. Flying above the island was a blue bird with a funny green feather frill, a mohawk! Pinkie Pie’s pet alligator, Gummy, had firmly chomped down on the frantic bird’s tail feathers, and wouldn’t let go. Thunder Gust and Shiftwing (morphed into pegasus form) flew up and attempted to remove the alligator from the bird, which they did, but their actions resulted in Gummy plummeting toward the ground (and near certain doom), until the distractable Cup Cake used her telekinesis to catch him.

After rescuing Gummy, the PCs decided to follow the faint dog howls to a small hut, surrounded by variously sized holes in the ground. Applejack’s dog, Winona, was tied up in front of the structure, and she was upset about it. Using stealth and guile to approach Winona without her making any noise, the PCs managed to free her and made it nearly away before attracting the attention of something underground. Moving quietly, the PCs managed to avoid the diamond dogs who had taken Winona captive, though those greedy hounds may come into play again if the PCs don’t escape the Everfree Forest soon.
While following a smoke trail, the PCs ran into the mysterious rhyming zebra named Zecora! Zecora gave some cryptic advice and gave each pony a healing potion for their journey.
Continuing to follow the smoke, the PCs left the Everfree Forest and entered a craggy, rocky canyon with pits and holes in the canyon walls. From the canyon mouth, they could see Rainbow Dash’s turtle Tank! Tank’s helicopter backpack apparatus was broken and the poor turtle was helplessly caught on a stone spur. Thunder Gust flew toward the turtle and got him free, but drew the attention of a fearsome quarray eel in the process. A breathless scuffle with the quarray eel ensued, in which Calm Heart, as well as Thunder Gust were swallowed whole by the monster! Cup Cake and Shiftwing (morphed to look like Cup Cake) used their telekinesis to get their companions free, and the four narrowly escaped back into the Everfree Forest with Tank.

With three of the Mane Six’s pets rescued, who will the PCs attempt to find next? Will it be the wise owl Owlowiscious? The prissy pussycat Opalescence? Or naughty Angel Bunny herself? You will just have to wait until part 2 to find out!