What kid doesn’t love dinosaurs? There is something about them that just seems magical, special.  Maybe it’s because while there is evidence they existed, it isn’t like any one of us is ever going to get to see a real live one.

Which could be one of the reasons they show up in Pathfinder (and other RPGs).  If you live in a world with dragons, ogres, and gelatinous cubes, it stands to reason dinosaurs are just as likely to be walking around.

If you loved them as a kid (or adult), and I mean really loved them, you probably know exactly how many claws a T-Rex has, what the difference between a brachiosaurus and an apatosaurus is, and why a pterodactyl is super awesome, but isn’t a dinosaur.  If you just think dinosaurs rock, and want to call the long-necked ones a brontosaurs, that’s cool too (I did until I had Rugrat #1 – he will take any chance he can to correct me and my dinosaurs knowledge).

Forget the dragons!
Ditch those gelatinous cubes!
And ogre – take your stinky self somewhere else.

It’s time for a foray into the prehistoric world!

There are lots of cool ways to do this: the party ends up on an island (think Jurassic Park); the party steps through a portal into a prehistoric world; the whole campaign is set in a world where dinosaurs are more common.  Whatever set-up you chose, what you need is more dinosaurs.

I have combed through the Bestiaries.  There’s a bunch of dinosaurs, and a bunch of other prehistoric beasts, but there’s definitely room for more if you want a whole campaign set with these radical reptiles.

Flaming Crab Games put out a fun Letter back in September.

Letters from the Flaming Crab: Dinosaur Companions details 25 new prehistoric creatures (mostly dinosaurs), and includes a bunch of them as animal companions, mounts, and/or familiars.  But more than just a bunch of stat blocks, this product also includes encounters. What do you players do when they find an injured dinosaur? Or when they have to pass through a nesting ground?

Yes, I worked on this project. Rugrat #1 is obsessed with dinosaurs and I could not pass up the opportunity.  He’s on the verge of gaming, and we are trying to draw him. A way to add something he loves to something I think he’ll love was a no-brainer. I actually had him brainstorm some of the dinosaurs he’d like to see, and we talked about what sorts of things the dinosaurs might be doing.  It was awesome to see him use his imagination. 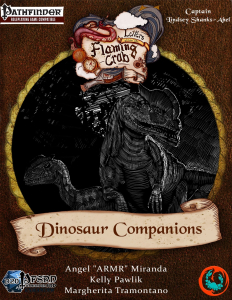 Never fear though, at the end of the day, Letters from the Flaming Crab: Dinosaur Companions was written by a great team of writers (who aren’t 6 – that I know of), and overseen by J Gray, a talented developer.

If you love dinosaurs, or you have someone in your life who does, this is a great PDF to pick up.

Grab it today and make your game a little more prehistoric.

And because I don’t want you to think this is just a plug for an awesome product, here’s an encounter (not found in the book). The troodon can be found on the SRD, while the maiasaura is in Letters from the Flaming Crab: Dinosaur Companions.

The PCs emerge from a dense jungle and find themselves at the edge of a large clearing filled with nests of maiasaura eggs. A dozen huge reptiles are spaced throughout the breeding grounds, paying close attention to their unborn children, and don’t seem to have noticed the PCs.  On the outskirts of the breeding grounds, fifty feet away from the PCs, a troodon can be seen eyeing an unattended nest.

Two rounds after the PCs arrival, a second troodon is seen across the clearing; it makes a move toward a nearby nest, and several maiasaura immediately take notice.  With a lot of noise, the soon-to-be-mothers charge toward the invading egg thief.  The nearby troodon makes its move, scurrying toward the closest nest.

If the PCs don’t retreat, the maiasaura quickly notice the troodon near them fleeing with an egg, and attack all apparent invaders.