A Buzz on Spring Break – “For The Hive” Play Account 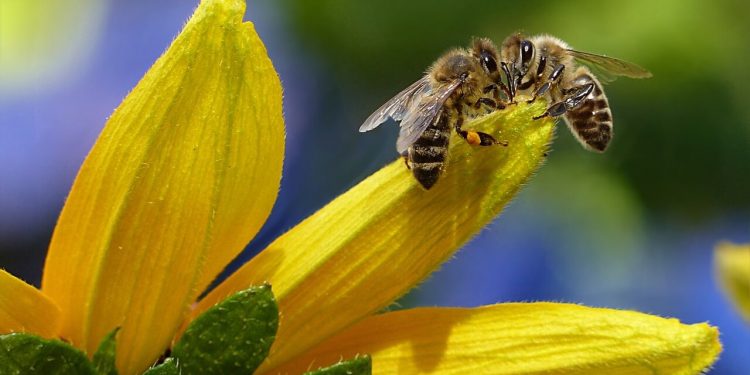 Ah spring break. A glorious time full of fun and excitement and a break from the monotony of every day life.

And as a work from home mother of three small children with no child care, it is also a really long two weeks where I struggle immensely trying to juggle work  and rugrats intent on getting up to no good (I believe it was day two that Rugrat #2 shoved half a dozen smurfs into the baseboard heater while I was showering).

Gardening, baking, colouring pictures, and Pokémon Go can go a long way, but Ken and I decided spring break was also the perfect time to break out another RPG adventure for the kids. We agreed it was time to play For the Hive, a really well reviewed adventure written by J Gray and published by Playground Adventures.  I thought it could be fun to add a fourth player to our game, and I suggested we try bringing another child into the mix. So a couple of weeks ago I called the mother of Rugrat #1’s best friend.

It was an awkward call because I have never broached the topic of RPGs with other parents. “So, uh, hi Parent! Do you have a minute? I wanted to talk to you about something.” Immediately I realized it sounded bad, like her child had done something wrong.  She was driving, using her car’s speaker phone, so there was also that awkward bit where you feel like you have to talk extra loudly while introducing role playing games to someone when you can’t even see their face to gauge their reaction.  She’s awesome though, so with the promise of letting her look over the adventure before we played it, she said it was a go.

A week and a half later, the first Saturday of Spring Break, was the big day.  Rugrat #1 & #2 were bouncing off the walls with the impending arrival of Friend 1, who arrived grinning ear to ear.  Getting the game started proved a bit tricky. We had gone ahead and premade the characters for the kids, guessing what type best suited Friend 1. The sheets were bang on, but the lure of the pawns, tokens, and visible map were strong. The kids kept trying to play them like a board game and had trouble listening. Eventually, with food in their bellies, Rugrat #3 safely in her crib for a nap, and pawns and character sheets sorted out, we began. 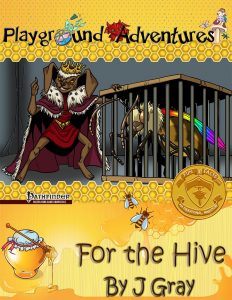 Here is where I jump in and say that if you want to read a review of For the Hive, you can find Ken’s here.  There are also some reviews with the product here.

With everything set, the adventure began.  Ken adjusted it slightly, setting it at a nearby library we like to visit, but as written, the adventure makes it easy for players to become invested – who doesn’t want to help a friend, and save a bee hive while they are at it?

Friend 1 sat quietly and super still, listening intently as the story unfolded.  Rugrat #1, who is seven next month, squirmed and wiggled, which is typical for him.  The key things Bzzercup had to say could have been stressed better to the kids (the Rugrats had trouble focusing), but that was not the adventure, it was our kids and the delivery of those facts – a good reminder not all kids focus as well as Friend 1! GMs playing with kids for the first time: remember your audience!

Rugrat #1, who is an anxious child, had a lot of difficulty with the idea of shrinking in size, even when we stressed it was just pretend.  With some convincing from Friend 1, he reluctantly agreed, and we were are able to set off across the grass to the hive.  Here the beautiful map came into the play.  The kids loved this map, and we had to run off to print a few extras (how hard sharing can be).

One of the big things I noticed running this adventure for kids is how much (at least mine) needed to be reminded we were doing this together, that we were a team, and that we all had to help each other.  It’s a hard thing to learn – accepting you won’t excel at everything, but that what you may not be able to accomplish someone else on your team can.

A great example was the magical looking glass lost in the huge expanse of grass.  Rugrat #1 was super upset he couldn’t activate it, but I pointed out that without him we wouldn’t have even known what is was or what it could do. Teamwork let us jump forward across the lawn (but downside – he didn’t get to come across the praying mantis he saw in a piece of art, and there was a bit of an upset about that).

So How’d They Do?

Simply put? They succeeded in the goal of the adventure.  And not all groups do.  There were some hurdles though.

One major thing Rugrat #1 had trouble with is things not going his way.  This is a fun little educational adventure, but (much like any other RPG session) the joy gets sucked out a bit when a player throws a tantrum and storms out of the room because his dice aren’t rolling well. After being given the chance to calm down, Rugrat #1 did rejoin the party, and he was just in time for the big final show down.

Rugrat #2 remained quiet for most of the adventure, chiming in during combat to grin and yell “I hit it!” (naturally we made him a barbarian). He was feeling a bit under the weather and lounged across his chair, with his feet on me, or sat on my lap for most of the adventure.  When Ken and I game we sit in the basement on a big day bed with a table nearby.  It’s super comfortable. It’s also a space that would have kids bouncing all of the place and playing with pillows.  Be sure to find a space the kids can focus, but everyone can be comfy – sitting on our hard wooden IKEA chairs for a couple of hours with a four-year’s bony bum wiggling around wasn’t exactly ideal.

Over the course of the adventure, Friend 1 would randomly grin and exclaim “This is so much fun!”, making the afternoon so much better. He was the wild card for us as we’ve played with the Rugrats on a few occasions, and I must say he was a delight.  (There may have been mumblings afterward of sending Rugrat #1 to his house next time and having Friend 1 come by and game on his own.)

Rugrat #1 and his friend told us they had completed a unit on bees in school, and knew most of the bee facts that were shared during the adventure, but Ken and I found them interesting. I would recommend that anyone GMing to the younger crowd makes a point of these facts. It is really easy for them to get lost in the excitement of the adventure, and they are pretty interesting (plus a great educational take away).

Rugrat #1 hates conflict. And not being awesome. Obviously these are serious hurdles with Pathfinder.  On more than one occasion he stormed off, hiding in his room. I’m not sure there’s a great way to avoid this if you have a similar child in your life, but reminding him (or her) ahead of time about teamwork is a good idea.  This adventure also did a great job of not having the players “kill” anything.  Opponents were paper wasps.  Wasps actually made of paper (and it was a great tie-in to a previous PGA adventure).  This meant instead of killing a living thing, characters destroyed or ripped the paper, defeating the paper wasp – a very nice touch for children who are sensitive or otherwise upset by violence. I think this made it easier for Rugrat #1, and Rugrat #2’s favorite thing was “ripping the paper wasps.”

All in all, the Rugrats and Friend 1 had fun with this adventure, and both older kids said their favorite thing was helping the queen bee, but it seems Adventures in Wonderland is still the reigning favorite, and the Rugrats are eager for more of that soon. (More on that later!)