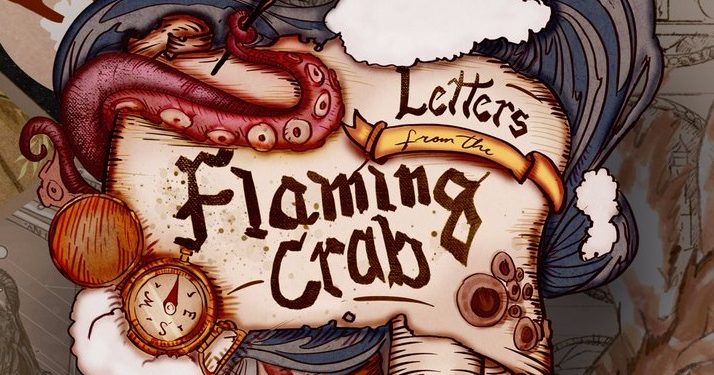 Are you familiar with Letters from the Flaming Crab? If not, it is a monthly series of Pathfinder-compatible supplements; each Letter focuses on exploring a different topic to give gamemasters and players new, exciting options that can be dropped into any campaign. We’ve talked about them before (Murder Bunnies, Dinosaur Companions, Gnomes vs. Gremlins, and Household Magic Catalog), and we’re back again about the most recent one.

These ghost-like creatures assign themselves to children and act as companion and guardian to their chosen ward. Each has a different appearance, shaped by the imagination of the children they protect.

Nine children, including two of our rugrats, contributed to this entertaining collection of “monsters.”

Rugrat #1 and Rugrat #2 had a great time with this project, and Rugrat #1 even went so far as to write two of the imaginary friends found within the magical pages. His growing love of Pathfinder, combined with an urgent need to acquire enough money to purchase a new package of Pokemon trading cards, meant working in the gaming industry was the best thing ever. While we don’t love his obsession with those cards, we had to applaud his work ethic on their project, and his desire to take part in RPG design.

Truth be told, both Ken and I think Rugrat #1 could make an excellent GM in a few years, and FCG giving the next generation a chance to test the waters is a really cool thing. 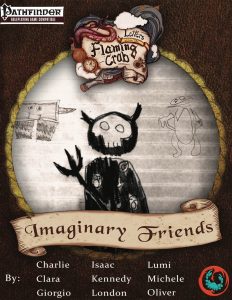 Rugrat#2 brought his favourite stuffed elephant (named Ella) to life, while Rugrat #1 created two monsters whole-cloth. His creativity in their abilities, what they were, and how animatedly he described them admittedly surprised us, even though we know he’s an avid reader with a pretty cool imagination. Rugrat #2 mostly held onto Ella in a loving/territorial fashion while we asked a lot of questions, but I could sense his excitement hidden behind the understuffed lovie.

The colour illustrations included in the PDF were all created by the contributors, and watching our rugrats focus so intently on creating these imaginary friends was so enjoyable. They colour a lot, but we see way too many Pokemon, so watching on as Rugrat #2 painstakingly drew his beloved Ella, well it was a nice change.

For people worried about the stat-blocks for the imaginary friends, rest assured they were created with input from the children named in the project and then (at least in our house) written by the adults before (per usual) being edited and developed by the amazing J Gray at FCG.

I’m a little biased, but I whole-heartily recommend you hurry over to DriveThruRPG and pick up this fun little PDF. Then, when your PCs make trouble in town, you can put them up against something a bit different: the imaginary friends of the local children.