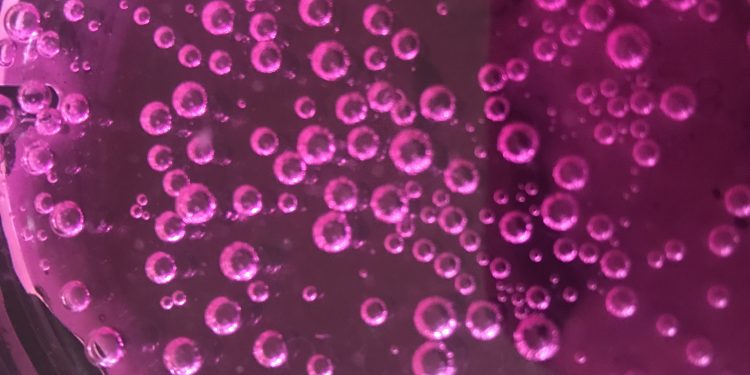 For our latest field trip the students of the college set out to find the magical ingredients needed for a potion. We used an adventure called Madam Margareth’s Magic Potion, and simply changed the setting from the Village of Glavost to the school.

A young boy has fallen ill after eating a poisonous mushroom and the only cure lies in an ice cave at the top of a mountain! Can a group of heroes make it to the top of the mountain, face down a fearsome yeti, find the cure, and maybe learn a bit about chemistry on the way? This science based short also includes a fun experiment for everyone to enjoy.

In play, the kids started out in the village of Belcassel where they had figured out that a griffon had been stealing the local farmers’ livestock. Further investigation indicated the former mayor’s daughter was using a book she found in the library to magically combine beasts into other monstrosities. Worse, she had taken the book and set out for parts unknown. Who knew what she could get up to with such a potent magical tome?

On their way back to the college, the kids and their teacher ran into Professor Kirby, another teacher from the school. She was being led by some confused and frightened children. Learning that another student had collapsed in the forest, the kids joined them. Using the directions from the scared kids and their own nature skills they found Cedric, the injured boy who had collapsed after eating a wild mushroom.

Professors Rattles and Kirby didn’t have all the ingredients to make an antidote for Cedric, but they knew frost stones could be gathered at a nearby mountain. The kids set out to get the frost stones and were waylaid by hungry wolves. After taking care of the beasts, they had a bit of trouble climbing the mountain, but managed with a bit of teamwork (both in and out of game).

At the mountaintop, they discovered a cave! The boys went into the cave and discovered the frost stones they needed. Gemstone the barbarian stayed outside and was alone when the resident yeti came home. Gemstone defeated the yeti in an arm wrestle and gave it some food in exchange for the frost stones. 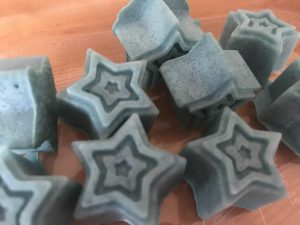 The kids then descended the mountain and set off to save foolish Cedric.

We knew everyone would want to be hands-on, so we made enough to assemble three magic potions. For ease of cleanup we also put everything on a cookie tray. Kelly has invested in various fun shape dice cube trays over the years, so she made the frost stones in the shape of stars. (The directions for how to recreate your own experiment can be found in the pages of the adventure.) 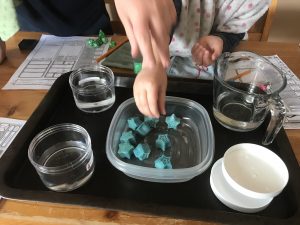 They loved dropping the frost stones into the potion. After our conversations about diffusion, the rugrats predicated the potion would be blue. This is a fair guess since the liquid is clear and the stones are blue. The resulting purple seemed like magic. 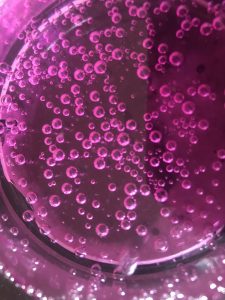 If you haven’t checked out any of Playground Adventures After School Adventures, we highly recommend them. They are short, easy to run for kids, and have an educational element called out in them.